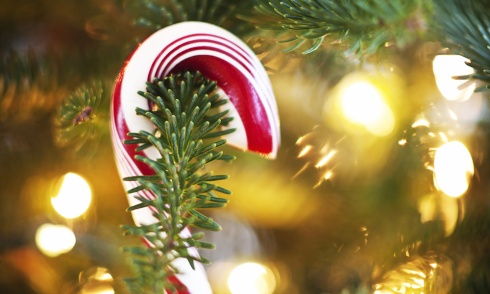 I finally got my tree this week.

The front lot at Hanson’s Farm up the road glistened with new-fallen snow. They had fewer than a dozen trees left, having started with nearly two hundred just three weeks ago. This actually worked in my favor, given my longstanding tradition of choosing the Charlie-Browniest tree I can find — the one least likely to be picked due to some flaw or other.

Some I had to rule out on account of their being too tall or too fat to fit in the space, nestled between a window, the bookshelf and the low pitched ceiling in that corner of my second-story farmhouse living room.

Yet even with the further reduced selection, they all seemed perfect. Too perfect.

I gave them a second looking over and then a third, before deciding on the only one that appeared to have any gap at all in the branches — a little Fraser fir.

The owner, a kind-faced farmer with weathered skin and calloused hands, sold me the tree for just twenty dollars, including trimming the trunk by half an inch and settling my purchase into the trunk of my car.

It started to snow again on the drive home — that kind of gentle snow that looks like tiny perfect circles and falls straight down.

Once home again, I hoisted the tree onto one shoulder and edged my way up the narrow, steep stairs, seemingly without losing a single needle. As I settled the base of the tree into the heavy cast-iron stand, I noticed that the trunk was actually bent. I’d have to work a bit to get it to stay upright. I smiled. I’d chosen the right tree after all.

Lying on my back, branches outspread above me, I steadied the tree with one hand while turning the three keys bit by bit.

Tighten this one three times.

Loosen that one twice.

As I worked, my face mere inches from the stand, something rather magical happened. So cold was the tree still that, though the room was plenty warm and cozy, I could see my frosty breath.

At last, the tree was standing plumb.

I gave the frigid tree a day for its branches to settle. And by the next morning, the house was already permeated with the rich scent of evergreen. All of the water I’d poured just the night before was gone, having slaked the thirsty tree, and so I added more.

It was time to string the lights.

My lights are white, never the colored variety. No LEDs. No blinking. No fading. Just the old-fashioned, steady white bulbs — the kind where the whole strand goes out if one of them fizzles.

It’s very important that the lights wind deep inside the tree as well as to the tips of branches, as opposed to simply wrapping them round and round the outside. It gives the tree depth. And as much as possible, wires should be strategically hidden, since they break the magical effect.

Once the lights were in place — with just the right number remaining to weave into the wicker star on top — I gave myself an evening to enjoy the tree in that simple state.

Friday night, serenaded by Bing Crosby and the Andrews Sisters, I decorated the tree with ornaments spanning a lifetime.

Cookie-cutter shapes — a holly leaf, a stocking, a gingerbread man and others — each made by hand with nothing but applesauce and generous amounts of cinnamon, and smelling exactly as you might expect them to.

And, of course, the candy canes.

Actually, the candy canes are the first to adorn the tree. There are only five left from the set of twelve that first decorated the tiny tree in my dorm room during my freshman year of college.

That makes them exactly three decades old this year.

And, yes — they are real candy canes.

When Chad was still in high school, I had a group of his peers over around Christmas time. The crowd was bigger than anticipated, so I ran out quickly to grab some more food. When I returned, Chad told me, a look of comical disgust on his face, “I think something’s wrong with your candy canes. I ate one of them. It tasted gross and…[click the button below to continue reading this post at the main site]