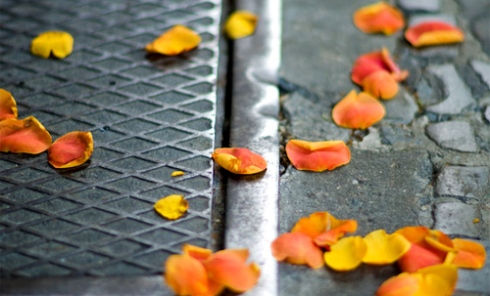 Typically, I publish a brand new post each Friday. I enjoy the challenge, honesty and real-time engagement of writing new posts each week and sharing them with you. However, I felt this week warranted a first for me. While I certainly find occasions to share previous posts again, I’ve never reblogged the same post twice. But after having reread this post from exactly four years ago today, I was moved deeply again – in familiar ways, but also in new ones. It allowed me to refocus, to see with crystal clarity some things that had become a bit blurry around the edges. I felt there was no additional sentiment or perspective I could add at this moment that would better capture what I felt and wrote those four years past; and so it is that I share it with you again today.

Saturday, I woke to find a message waiting on my cell.  It had come in a couple of hours beforehand.  It was my mother.  She was on her way to the hospital, letting me know that my Nana had taken a fall.  She didn’t know anything more.

My heart was immediately in my throat, imagining the worst.  We’d just lost Grampa last spring, and now –

I was able to reach my mother, who was already in the hospital.  Best anyone could figure, Nana had fallen sometime during the previous night while bringing her coffee cup back to the kitchen.  She had banged her head badly on the frame of the bed and lain all night there on the floor, unconscious.  In the morning, as she came to, she had the presence of mind to remember the MedAlert necklace and press the button as she’d been shown.

This isn’t the first time Nana has fallen.  The last time, she was conscious the whole time.  It had been a couple of days before anyone found her there.  It was a saving grace that she had passed out during this weekend’s episode.  The thought of her lying there, fully aware last time, and being unable to get help makes me indescribably sad.

I had a full day planned, but of course, I would put it all on hold and reschedule things on the way to the hospital if they would be keeping Nana overnight.  I set in with my questions:

“Do they know what caused it?”

“Maybe lack of sleep, a med combination, or a sudden drop in blood pressure as she got up from the couch.”

“Did she break anything?”

“No.  She’s just got some nasty bruises on her elbows and head, but otherwise fine.”

As I talked with my mother, I could hear Nana in the background, talking up a storm with somebody.  That was a good sign.

“Will they be keeping her?”

Just after I hung up, I began to move things off of my schedule, in the likely event that Nana would have to stay overnight.  Shortly thereafter, however, my mother called me back.  The hospital had released Nana.  She was going home.  My aunt would stay with her.  They were getting her some kind of necklace based in new technology that automatically calls the hospital if the wearer falls.

I was relieved.  I didn’t know when the actual release would happen, so I tried to keep what I could of my afternoon schedule, awaiting further news.

Today is 9/11.  Those of us who are old enough to remember the events of ten years ago – remember it well.

I was just getting into my car to bring it for a tune-up, when a neighbor pulled in, got out of his car looking dazed, and approached me, ashen:  “Have you been listening to the news?”

Though I did not know the man well, I knew from his face and tone that whatever was on the news was dire.  My first thought was that the President had been assassinated.  The neighbor briefed me on the first crash and then hurried off inside, presumably to tell family the same.

I turned the radio on.  Every station was the same topic.  That is always very bad.

As I drove, little information was yet known.  It appeared to be some sort of bizarre accident.  I wondered how many floors of a building a plane crash could take out.  How many people had been victims, both inside and outside the plane.

I arrived at the service station.  All work had stopped.  There was no familiar sound of machinery or the echo of voices from underground bays.  Everyone stood in the waiting area, eyes transfixed on the screen.  Just like that, the news had changed.  This was no accident.

My head swam.  Another plane.  Hijackings.  And another plane.  How many?  Terrorists.  Boston Logan Airport.  I have friends who are flight attendants there!  The Pentagon.  The second tower.  The White House.

It felt like the end of the world.  Numbing.  How could our safety and security suddenly disappear like this?

The first of the towers began to show signs that it would not hold.  Chaos.  Smoke.  Panicked masses flooding from doorways.  Businessmen and women, tailored clothes torn, running wildly down streets under a snow of ash.

Someone jumped from an upper window.

Yet, as memorable as the shock and terror of that day – was what happened next.

All of the other “urgency” of life – stopped.  The lists of Must Do’s got set aside, deemed less than critical after all.

We suddenly became less selfish, more noble.  Less about me and more about us.

Volunteers turned out in record numbers to help the rescue efforts.  People took all of their vacation time to go.  To do whatever they were allowed to do.

Prayers flooded the television sets.  Billy Graham was interviewed on major news programs.  Hard-nosed critics from “the other side of the fence” leaned in.  Respectful.  Listening.  Hoping for comfort.  Open to viewpoints they’d have openly ridiculed the month before.

Flags were displayed in record numbers.  Patriotism soared.  Speeches were numerous about the ideals upon which our “Great Nation” was founded – ideals which had long gone out of vogue if one did not wish to engender a heated battle.

Communities across the nation engaged in candlelight vigils.  Whole streets shone with solemn unity as neighbors said hello to one another – timid but heartfelt – for perhaps the first time.

How soon we forget what is important and what is not.

I realized, as the news of my Nana’s fall came, that I was willing – and, yes, able – to put life on hold to be with her.

If she would be kept overnight.

If it were more serious.

But finding that she was all right, as relieved as I was, I pieced my schedule back together and went about my business for the day as planned, promising myself I’d see her “soon.”

Why does it take dire circumstances for us to realize the value in what is truly valuable – in what has been valuable all along?

The truth is, none of us knows how much more time we will have with those truly valuable people in our lives.  I think today is a day to remember – to start remembering – not only the fallen of 9/11, but the “future broken glasses” all around us.  To upset our schedules and distractions, in pursuit of more time spent with those we love.

You can bet I’ll be by to visit with Nana this week.  Maybe I’ll bring some old swing music.  Maybe I’ll read some of my book to her.  I’ve been meaning to for a while.  It’s time I stopped “meaning to” and just decided to make it happen.